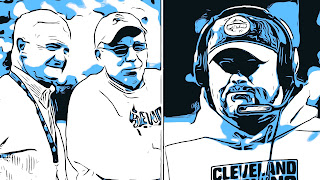 This Browns season was supposed to be different. It wasn’t, and the aftermath isn’t either: Jimmy Haslam is cleaning house and hitting the reset button once again. Head coach Freddie Kitchens was sent out the door on Sunday night, and GM John Dorsey followed on Tuesday afternoon. The guys look back on yet another year that went off the rails and take stock of the state of the franchise, from OBJ to Baker Mayfield to the Haslams, as another reboot begins.

Plus: An Ohio State-Clemson game that was every bit as good as expected, one inexplicable replay overturn, and one surprisingly conservative late-game decision by head coach Ryan Day, as well as the future of the Buckeyes and the legacies of the outgoing J.K. Dobbins and Chase Young.