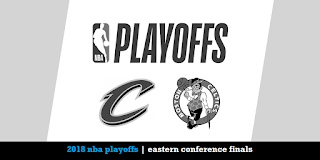 With a ridiculous running floater off the glass last Saturday night, LeBron James broke the spirit of yet another Eastern Conference franchise, as the Raptors bowed out meekly on Monday and fired head coach Dwane Casey four days later. A transcendent postseason for LeBron continues in the Eastern Conference finals, where the depleted-but-not-defeated Boston Celtics await. Aside from LeBron’s shot-making abilities, the Cavs were steadied in Round 2 by the presence of point guard George Hill, the outside shooting of J.R. Smith and Kyle Korver, and a devastating two-man game from Korver and Kevin Love. The guys preview the conference finals with the Celtics, air grievances about Boston, and quickly set up the West series between Houston and Golden State.