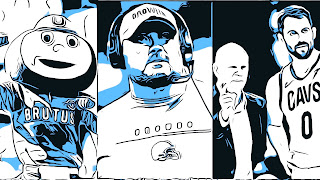 It’s an old school edition of the Nail as the guys go around the horn on the Buckeyes, Browns and Cavs, no guests needed. First, with Ohio State rolling and star defensive lineman Chase Young set to return next week, Travis makes the case that this is the most complete Ohio State team in a generation. Plus: the biggest remaining threat on the Bucks’ schedule, way-too-early talk of an OSU-LSU national championship game, and why we’ve had so many big day games in college football this year.

Next: On the eve of a Thursday night showdown with the Steelers, are you believing in the Browns? The guys discuss Sunday’s ugly (but needed) win, the Freddie Kitchens experience, and the debut of Kareem Hunt.

Finally, this year’s Cavs are…fun? John Beilein and his staff appear to have their squad buying in. Collin Sexton is making strides. Darius Garland is showing glimpses of hope. And Tristan Thompson and Kevin Love are playing as well as they ever have in a Cavs uniform. Through 10 games, it has been a formula for entertaining hoops.