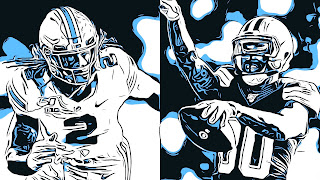 Is The Game still THE game? Heading into its tilt with Michigan, Ohio State has reclaimed the top spot in the College Football Playoff rankings and is steamrolling its way toward a playoff berth. The Wolverines and Coach Jim Harbaugh are still just trying to figure out how to break through for a win in this series. The guys discuss the stakes for the Buckeyes on Saturday (and whether a loss would even kill their playoff chances), the state of Michigan football under Harbaugh, and whether this year’s edition of The Game can be competitive.

Meanwhile, with the Browns and Steelers set to renew pleasantries just 10 days after all hell broke loose between the two teams in Cleveland, the guys cover Pittsburgh QB Mason Rudolph’s demotion (…as conveyed by Sugar Ray singer Mark McGrath!) and what the Browns need to do to finally win at Heinz Field for the first time in 16 years.