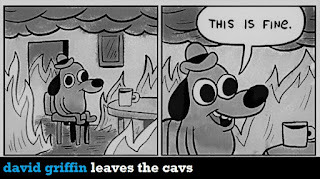 On the one-year anniversary of the Cavs winning the NBA championship, the unthinkable has happened as the team has officially parted ways with GM David Griffin. The guys convene an emergency podcast to make sense of the Cavs sending the architect of their title team on his way to future endeavors (and mostly just vent for 25 minutes).