Episode 124 – Hurry up and deal: What are the Indians waiting for? 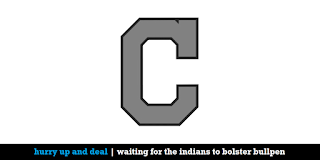 Sooooo...you could say the Indians took care of business on Wednesday night. But 24 hours earlier—you know, back when they weren’t putting up 19 runs—a lackluster start to the 9th inning by closer Cody Allen, a miscommunication between manager Terry Francona and pitching coach Carl Willis, and a bad matchup for reliever Dan Otero turned a fine night at the ballpark into downright ugly loss, bringing out the boo birds at Progressive Field. It was called the nadir of the season for the team's beleaguered bullpen, and aggravation is mounting amongst the Tribe faithful. A talented-but-flawed Indians roster continues to trudge through the season in first place in the AL Central, but clearly is a step behind the rest of the league’s top teams. What is the Tribe front office waiting for? The guys discuss that, as well as Travis’ adventures at the AAA Home Run Derby in Columbus on Monday night. …. Plus: Travis is once again riding in Pelotonia to raise money for cancer research. You can help by donating at: pelotonia.org/travisulle