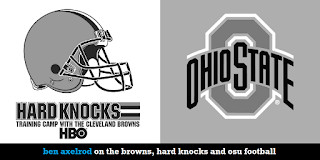 Even before the regular seasons for the Browns and Buckeyes kick off, it has been an interesting month for football fans in Northeast Ohio. Ben Axelrod of WKYC has had a front row seat for much of it, and he joins The Nail to discuss the storylines of “Hard Knocks” vs. reality at training camp in Berea, the Browns on the verge of becoming a relevant and interesting NFL franchise for the first time in years, the players making it happen like Myles Garrett—and those who apparently won’t. (Sorry, Mychal Kendricks.)

Meanwhile in Columbus, it has been a turbulent preseason for the Ohio State football program. Axelrod explains the challenges of covering the Zach Smith/Urban Meyer scandal and making the transition back to on-the-field matters, where the Buckeyes figure to be in the mix for the Big Ten title and another berth in the College Football Playoff. Plus: Players to watch and potential CFP sleeper teams.