Episode 049 – World Series wrap-up: The sun sets on the Summer of Cleveland 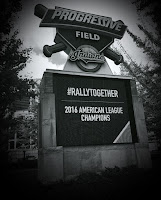 The 2016 World Series had almost everything—except a fourth win for the Indians. A night removed from one of the most historic games ever for Major League Baseball, the guys pour one out for the Tribe’s gritty postseason run, deal with the Cubs fans' takeover of Progressive Field and life as the Other Team during a broadcast of a championship series, and look ahead to what’s next for the Indians and baseball in Cleveland.