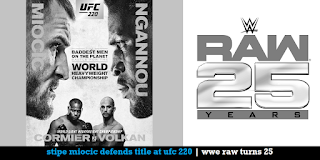 UFC heavyweight champion Stipe Miocic is defending his title against Francis Ngannou on Saturday night, and News-Herald sports editor Mark Podolski is in Boston to cover the fight. Podolski has known Miocic since the champ was a wrestler for Eastlake North High School and a placekicker for the school’s football team, and he has followed Miocic closely throughout his MMA career. In his latest appearance on The Nail, Podolski shares stories from Miocic’s high school years, sets the scene at UFC’s media day on Thursday, previews the fight as Miocic tries to become the first UFC heavyweight champ to reach three successful title defenses, and gives a rundown on the red-hot, trash talkin’ challenger Ngannou. ... Plus: WWE Raw will celebrate its 25th anniversary on Monday night. The guys relive memories of WWE’s flagship show, including the time Tom went down to the then-Gund Arena, and was left standing outside without a ticket as a historic episode got underway.

Intro/outro music: "The 3rd" by Anitek
Posted by Nail in the Coffin at 8:00 AM